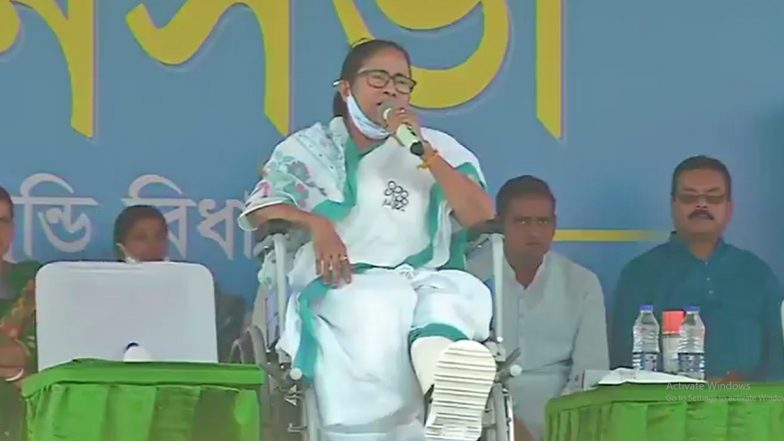 New Delhi, September 6: The Congress party is not in a mood to field candidate against West Bengal Chief Minister Mamata Banerjee in the larger interest of the Opposition unity, said a party source on Monday. WBPCC chief Adhir Ranjan Chowdhury is likely to make a formal announcement in Kolkata.

During her meeting with Congress High Command Sonia Gandhi recently, Banerjee had emphasised on the importance of Opposition unity to take on the BJP.

The Election Commission on Saturday announced the date for the by-elections for three Assembly constituencies including Banerjee’s stronghold Bhabanipur. The rest two are Samsergunj and Jangipur in Murshidabad district. The voting in these three constituencies will be held on September 30 and counting is scheduled for October 3. EC Announces Bypolls for 3 Assembly Seats Including Bhabanipur in West Bengal; Check Polling Date and Full Schedule Here.

The by-election in Samsergunj and Jangipur were withheld because of the death of the candidates before polls during the recently concluded Assembly election in West Bengal. On the other hand, by-election in Bhabanipur Assembly constituency necessitated because existing MLA Sovondeb Chattopadhyay resigned from his seat to make a room for Banerjee.

Banerjee lost to the Leader of Opposition Suvendu Adhiakri in Nandigram in the recently concluded polls and is still not an elected member of the legislative body.

(The above story first appeared on Fresh Headline on Sep 06, 2021 01:22 PM IST. For more news and updates on politics, world, sports, entertainment and lifestyle, log on to our website freshheadline.com).